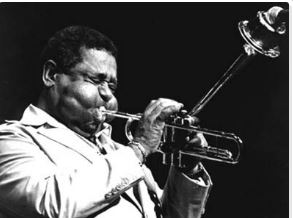 He was born in Cheraw, South Carolina, the youngest of nine children. Dizzie’s father was a local bandleader, so instruments were made available to Dizzy.

He started to play the piano at the age of 4. Together with Charlie Parker, he was a major figure in the development of bebop and modern jazz.

In addition to featuring in these epochal moments in bebop, he was instrumental in founding Afro-Cuban jazz, the modern jazz version of what early-jazz pioneer Jelly Roll Morton referred to as the “Spanish Tinge”.

Gillespie was a trumpet virtuoso and gifted improviser, building on the virtuoso style of Roy Eldridge but adding layers of harmonic complexity previously unknown in jazz. In addition to his instrumental skills, Dizzy’s beret and horn-rimmed spectacles, his scat singing, his bent horn, pouched cheeks and his light-hearted personality were essential in popularizing bebop, which was originally regarded as threatening and frightening music by many listeners raised on older styles of jazz. He had an enormous impact on virtually every subsequent trumpeter, both by the example of his playing and as a mentor to younger musicians.